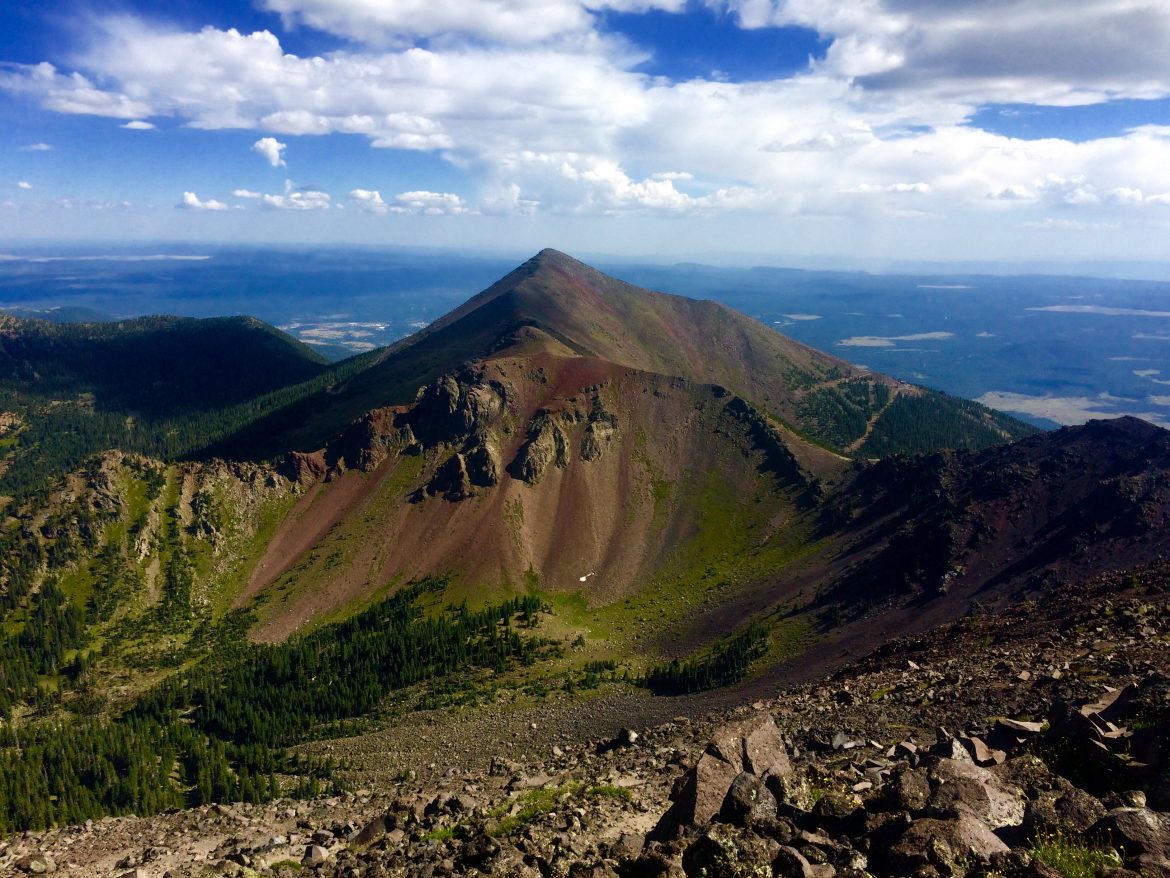 The San Francisco Peaks rise like an island in the desert as you approach Flagstaff, Arizona. The small range is in fact the remnant of a dormant volcano,  and home to trails that take hikers, runners, and explorers to breathtakingly beautiful locations overlooking the painted desert and Grand Canyon. It’s Aspen clad terrain is surprisingly more cool and shaded than what people expect to find in Arizona.

It contains the State’s highest point, Humphrey’s Peak. Humphrey’s stands at 12,633 feet in elevation and it’s Summit is a challenging and beautiful trail to conquer.

Access to the trailhead going up to Humphrey’s Peak starts in a parking lot at the ski resort, SnowBowl. The trail is roughly around 5-miles one way to the top, making it a 10-mile round trip adventure. It is very rugged with volcanic rocks and tree roots encompassing the route. Elevation gain from the parking lot to the top of Humphrey’s Peak is around 3400 feet. Very experienced hikers and runners are preferred for this trail and acclimated to the elevation. The time duration it takes a typical person to complete the trail is between 6-8 hours. More experienced hikers and runners completing the trail can range between 3-5 hours. 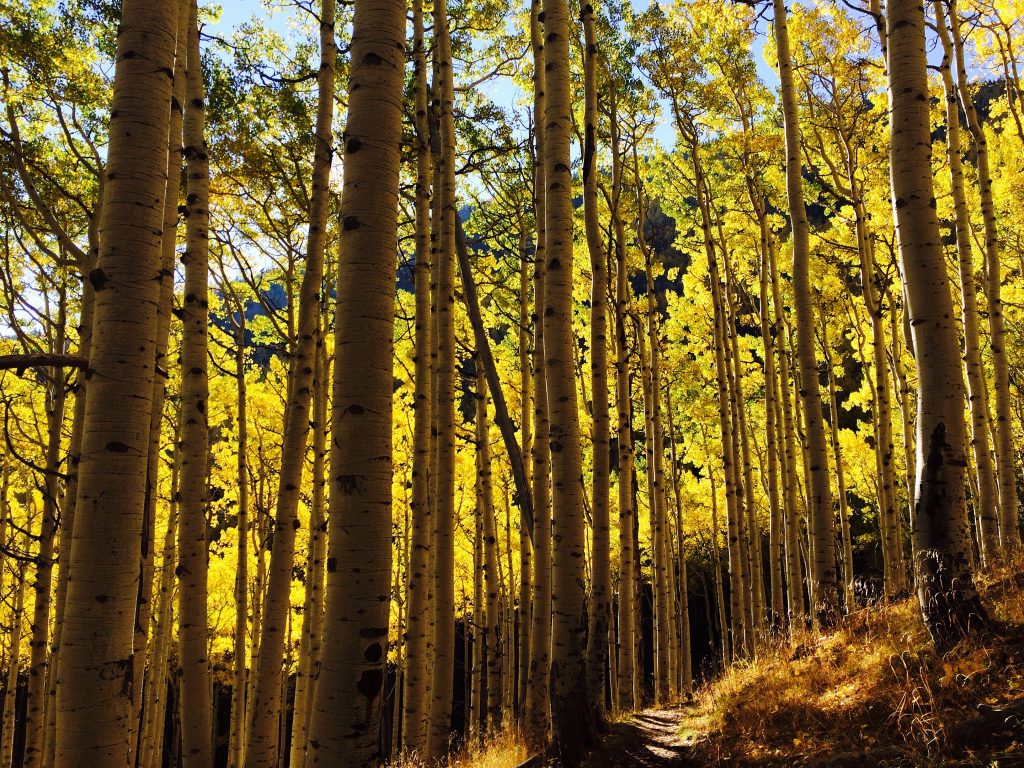 Walking through the aspen trees along the trail

Once on the trail, it winds through a mixed coniferous forest. The landscape surrounding the trail is heavy vegetated. One will see Ponderosa Pine, Aspen, and Douglas Fur trees through almost the entire route. After the first three miles of the trail, the tree line is exposed and the landscape at this point turns into rocky terrain with tundra and flowers growing in the surrounding gravel. This section gets steep with a few sections climbing over a few boulders that connects to a saddle between two of the peaks above, Humphrey’s and Agazzi’s Peak.

Approaching the saddle between Humphrey’s and Agassiz’s Peak is close to 11,000 feet in elevation.The landscape is mostly boulders and gravel deposits.The ecosystem has changed to a tundra environment. At this point on the trail, some mild climbing becomes involved to continue up the path to Humphrey’s Peak. The trail is marked by rock cairns. Wind speeds will often increase at this elevation and the temperature varies from warm to freezing. Bringing a warm layer of clothing is recommended. The trail will meander for the remainder of the path. The views become more spectacular above the tree line 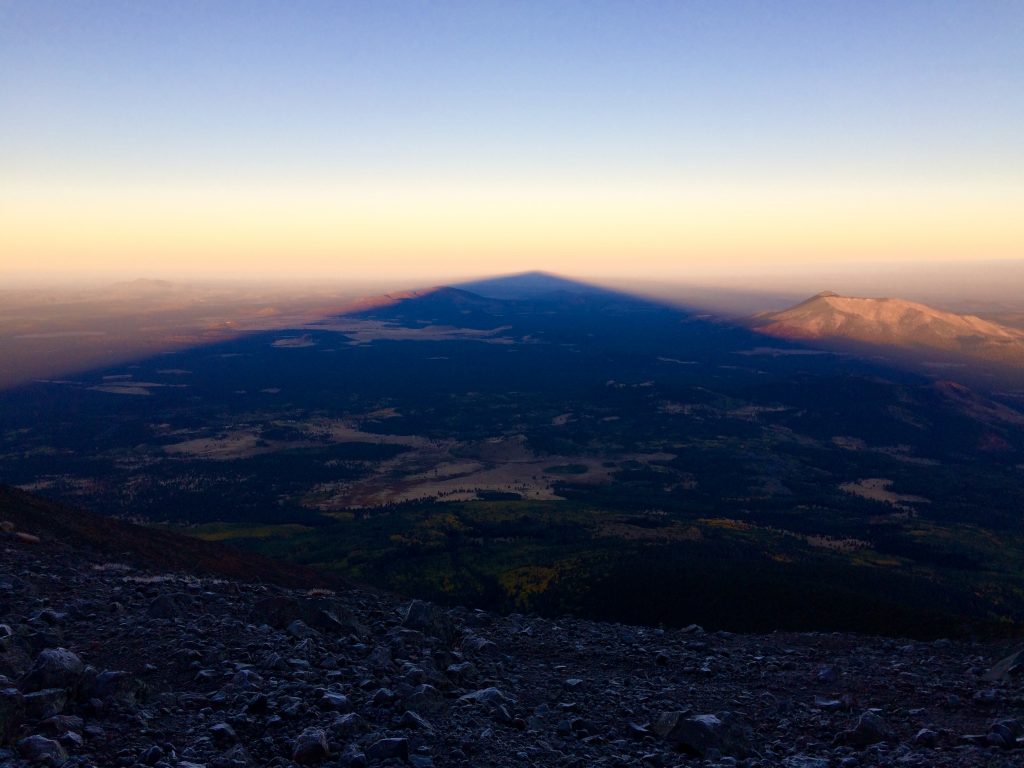 Looking into the west direction on top of Humphrey’s Peak at sunrise.

Finally, arriving at the highest point in Arizona is reached. 12,633 feet in elevation. Locations visible from the top vary from Sedona to the Navajo Reservation, all the way out to the Grand Canyon National Park. A lot of avid hikers and runners attempt to reach the top of the peak before sunrise, to catch the shadow of the mountain in the western direction. It is also a good hike to wonder through the Aspen trees, once their leave colors change to a golden color during the fall season in October. 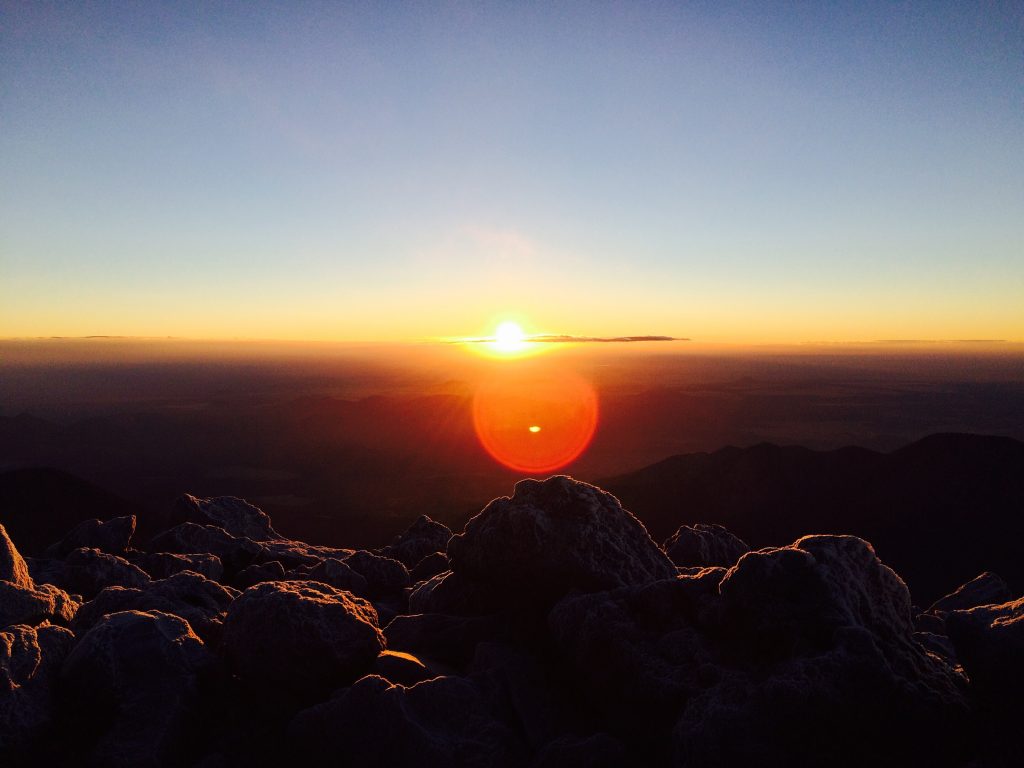 Hike smart on the mountain. Acclimating to the elevation takes awhile here in Flagstaff, Arizona. Take breaks and bring water to be more comfortable on the mountain. Directions to the trail going up Humphrey’s Peak is provided in the link here. Be aware of weather conditions as lightning has been known to claim the lives of unprepared hikers who were not expecting weather to move in quickly. (Humphrey’s).

Seriously Amazing Things to See on Your Way to Grand Canyon

Hi, John! This is an amazing article. You took some breathtaking photos (shadow of a mountain is amazing!). You gave some really important information and life-saving pieces of advice. I was wondering, is there anything you would like you knew before going on this hike?