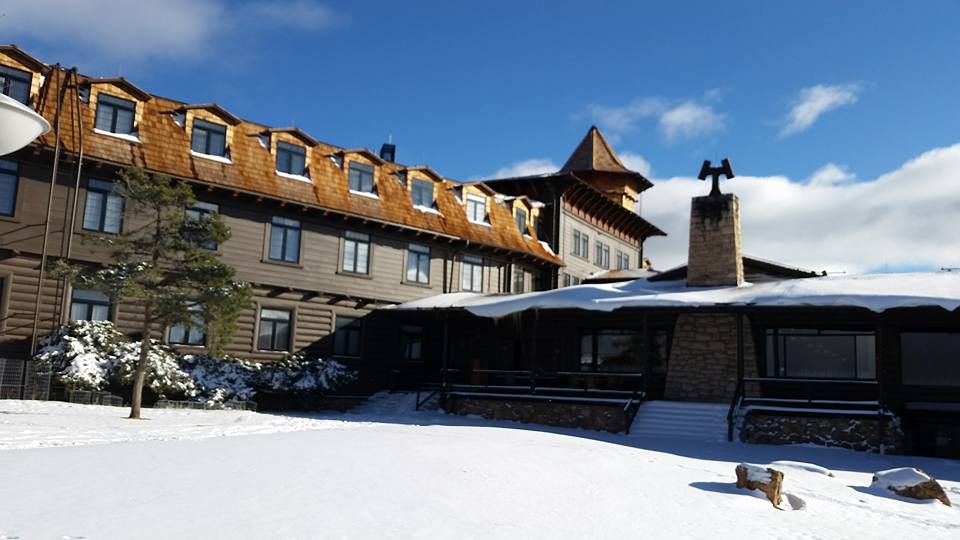 Do you believe in ghosts? Would you spend the night in a historic, said to be haunted, hotel… alone? The name of the individual involved in the following story has been changed out of respect, and the details mentioned are just that – a story. This story, however, is based on an actual event that occurred in 2015 at the historic El Tovar Hotel located inside the Grand Canyon National Park.

It was after midnight, and Patrick had just begun his nightly auditing work for the hotel. From the back office, he heard the Front Desk bell ring. There were no remaining check in’s due to arrive, so he assumed it was a current guest in need of assistance. He raised himself up from his desk chair and headed towards the front counter. A young woman stood in the lobby; she smiled at him as he walked towards her.

“I was told you might have a room left available this evening?” She spoke lightly through a smile. “You see, I’ve been traveling through the night and I’m exhausted. I’m excited to see the Grand Canyon in the morning, but for now I just want a comfortable place to rest!”

“I don’t doubt it!” Patrick replied as he opened the reservation system. “I have one room available, I can offer it to you at a discounted rate for a single night.”

“Perfect.” The girl sighed in relief.

Patrick had been working at the hotel for many years, and was used to the occasional weary traveller stumbling in during the night. He completed his normal check in procedure, and handed her the keys while wishing her a good nights rest. She humbly took them from his hand, picked up her luggage and headed towards the main staircase. Patrick watched her depart, and promptly returned back to his office work.

“Just about half way through,” Patrick thought to himself while stapling paperwork together, “Perhaps I’ll make myself some tea before…”

Before Patrick could finish his though, he heard the Front Desk bell ringing frantically at the counter. He quickly stood up and rushed towards the sound – there stood the young woman. She looked different – her demeanor had changed. Her face seemed to be overwhelmed with anxiety and her cheeks were pale white.

Patrick ran around the desk counter to greet the young girl in the lobby while a million thoughts ran through his mind. He looked at her pajamas and bare feet, “What’s wrong,” he asked her.

Through tears, the young woman looked at Patrick and said, “The room seemed cozy. I put my pajamas on, brushed my teeth and got into bed. Moments after I shut my eyes, I felt something tug at the sheets by my feet. It scared me so I turned on the light and nothing was there. I thought I had imagined it because I was tired. I turned off the light, and laid back down. Again, as soon as I started to fall asleep, something tugged at the sheets! This time, I opened my eyes and saw a figure of a woman at the foot of my bed! I turned on the lights, and nobody was there.”

Patrick looked deeply into the young girls eyes, wide and full of terror. He looked at her and smiled, “This is an old hotel, and you’re tired. Let’s go up together and take a look.”

“No!” She raised her voice, “No, I won’t go back. Someone needs to grab my bags from the room, you couldn’t PAY me to go there again.”

“Okay, it’s alright. Don’t worry, we’ll have a porter collect your things. Like I said,” he comforted the young woman, “This is an old hotel. There are many stories similar to the one you’ve just shared with me. I’m not sure what happened here tonight, but I can assure you, we won’t charge you for the room. You’re welcome to sleep in the lobby here if you’re too tired to drive tonight.”

The young woman slept on the back office floor that evening. She was so terrified to be inside the hotel after her ghostly experience that she didn’t even want to sleep alone in the lobby. Patrick watched over her until morning when his shift ended. He woke the young woman, and she left the hotel and never returned again.

The El Tovar hotel staff members have shared many stories, just like this one, over the years. I too have had my share of spooky occurrences. Some think the womanly specter that haunts the lodge is Mary Jane Coulter herself, others believe it’s a Harvey Girl. We may never know which spirits reside inside the hotel today, but what we do know is that they are most definitely present

Heart of the Canyon